Most of us carry our devices everywhere, especially when we go on an adventure. Devices these days run the gamut from smartphones to cameras to satellite messengers. All of these items use the same general power ports, so carrying an extra battery is easy insurance. Rugged and waterproof power banks are a great option to give you a top-up right when you need it most.

What is the Best Waterproof Portable Charger?

Portable battery packs are handy to keep around. We all have numerous devices that we need to keep charged, and these days many of them use standard USB ports. A portable charger is nothing more than a larger rechargeable battery that has a USB port to charge other devices. Most of them are the size and shape of a deck of cards, though some are larger.

The great thing about these battery packs’ ubiquity is that they are now specially tailored to fit different lifestyles. Many are now built to be a rugged portable charger or even a waterproof USB battery pack for adventurous trekkers. They can be kept in your pack or left in your car, ready for when they’re needed most. If you’re looking for an off-the-grid adventure, some water-resistant power bank models even have integrated solar panels.

How do you go about picking the best waterproof power bank? Some of your decision criteria are obvious–like making sure that your power bank can charge the devices you want it to. Many new phones use high-speed Power Delivery USB-C connections that are just not becoming common on these batteries. Also, make sure that your battery bank has enough juice to charge your phone and all your other devices a few times. Some are very small and designed for only a quick top-up.

The NOVOO is a slim-bodied charger that’s perfect for topping up your phone a few times. It’s an inexpensive and basic unit. With only 10,000 milliamp-hours of battery capacity, you can’t get very many charges out of it. But if you need a battery for emergency use, this one is just what you need.

This battery pack features a USB-C 18 watt Power Delivery (PD) port, so if you have a newer phone that uses this fast-charged tech, this is the portable charger for you. It’s perfect for newer iPhones or Android-phones like Samsung’s or Google’s models. It can charge most phones over four times or charge a table once. It has a flashlight and an accessory hook built-in. It’s rated IP67 and is UL certified.

Another great small charger is the myCharge, which carries just 6,700 milliamp-hours worth of battery. That’s down to just over two phone charges or so, but this portable charger is so small that you’d hardly know you’re carrying it. If you have a tablet or a higher capacity device, you’d be better off finding a bigger battery pack.

The myCharge has two USB-A charging output ports, offering a total charge amperage of 2.4 between the two of them. Most phones charge at one amp, so this shouldn’t be a problem. But if you want to top off a tablet, you can only use one port. It has a built-in carabiner for attaching to bags or belt loops, and it is IP67 waterproof. As a note, this is one of the few battery packs that does not include a basic flashlight.

If you’d like the ability to charge from the sun, the Sozo Power Bank is a great option. It’s a large battery power pack with 20,000 milliamp-hours of capacity. It also has wireless charging, if your device supports it, and a large-panel LED flashlight. The light has three brightnesses and can last up to 72 hours.

Sozo estimates that this pack can charge an iPhone X seven times. It can charge four devices at once, three from standard USB-A charging ports and one using the wireless technology. The solar panel is small, which keeps the unit compact but also limits the usefulness of the solar panel in general. Chances are you will most often use the USB micro cable to charge this port at home and rely on the solar panel only to add a little power when outside and for absolute emergencies.

If you need the most power you can squeeze into a battery bank, then the Techsmarter is the answer. It’s 30,000 milliamp-hour battery is one of the largest on the market. It also has a 45-watt USB-C PD port to be used with many laptops like MacBooks. It also has other fast-charging technologies, like an 18-watt TS+ Fast Charge USB and Quick Charge 2.0/3.0 outputs. It has four ports–one 18-watt TS+ Fast Charge, one 45 watt Power Delivery USB-C port, and two USB-A outputs.

According to Techsmarter, it could charge an iPhone XS nine times or a typical MacBook Pro 2.6 times. Power Delivery technology means that not only can this device charge others quickly, but it can also be charged quickly if you have a compatible charger, which is not included. That’s a big plus with a battery pack of this size. With so many different outputs, it’s also a nice bonus that Techsmarter includes a four-in-one USB cable with adapters for any device you might have.

It’s slightly less “waterproof” with a rating of IP66. That means that it can be exposed to water but not submerged. It has a built-in LED panel that can be used as a high or low-brightness flashlight or an SOS strobe. Even though the battery capacity is much larger than some of its competitors, this waterproof portable charger is still a reasonable size, measuring less than an inch thick.

Buyer’s Guide: Features to Look for When Buying a Waterproof Portable Charger 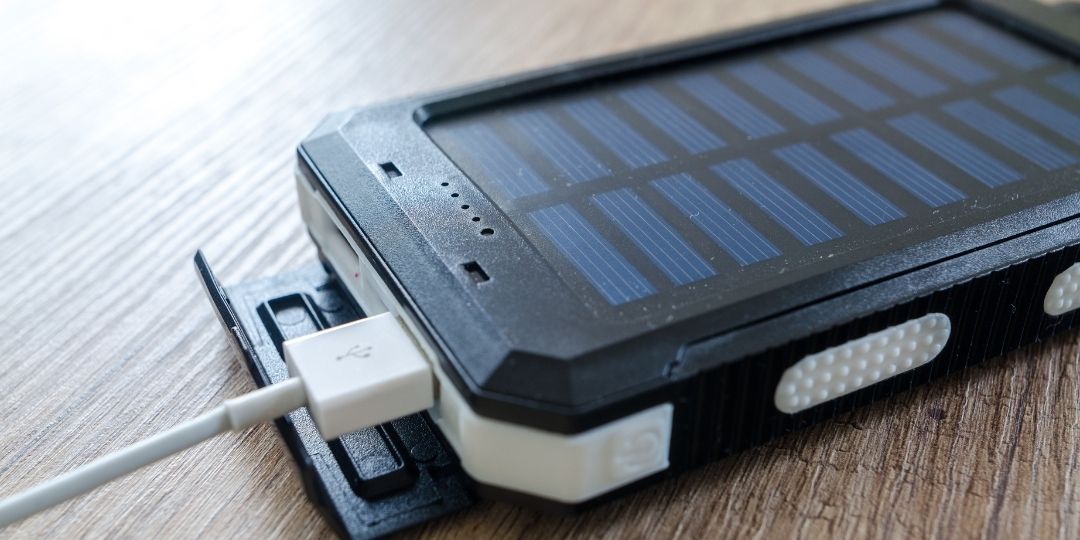 How Much Power is Enough?

Models of power banks are differentiated by their features. Many include flashlights, and some include cheap compasses or carabiners. If you want a solar panel, look for ones that have the biggest panels they can fit. But once these features are determined, the real difference comes down to how big the battery inside is.

Battery storage capacity is measured in milliamp-hours (mAH). This battery capacity matches that of your devices. As such, you can figure out how many times you can charge your phone or your laptop with some simple math. If you own a MacBook Pro with an 8,000mAH battery and you buy a battery back that holds 24,000 mAH, then you can recharge your laptop about three times.

Make sure that the device you purchase can charge the devices you want to charge. That might sound self-explanatory, but it can get a little complicated. There are now several “standard” USB charging schemes. Standard USB-A chargers put out five-volt power, usually at either one or two amps per hour. This is the standard port found nearly everywhere now–it’s been around awhile. All battery banks will charge to these specs.

But many new devices use the USB-C plug to run a “Power Delivery” USB charger. These have variable voltages and amperages, depending on your device. They should work, but it might not work as fast as you’d like. Be sure to double-check that the output of your battery pack matches the input of your device.

Are portable chargers waterproof? Manufacturers rate their equipment based on standard “Ingress Protection” ratings. Each level of this rating means that the makers tested the device and found it to meet specific requirements satisfactorily. Knowing exactly what those requirements are can help you make sense of the marketing language. If a device doesn’t publish its IP rating but instead uses vague language, you should be skeptical as a customer.

IP ratings usually consist of two digits. The first digit indicates how good the device is at keeping out solids, like dust or sand. The better sealed the device is, the better its rating. The second digit corresponds to liquid protection. Nearly all rugged portable charger models are rated for IP65 or above.

To be considered a waterproof portable charger, look for IP67 or higher. With this rating, the device has been tested by being submerged in water one meter deep for thirty minutes. Note, that’s only a few feet of water, so you can’t take it scuba diving. These aren’t devices that should be purposefully exposed or submerged in water–they are simply designed to survive in case of an accident.

The last feature that you will find on many water-resistant power bank batteries is solar panels. These panels are a handy way to add a little boost of power for your devices if you’re away from wall outlets. They’re even handy in an emergency if the power is out. But it’s important to note that they aren’t really designed to use these on a daily basis. The batteries in these power banks are fairly high-capacity, and the solar panels are low-output by comparison.

If you seriously want to use solar panels, look for battery banks with multiple panels for the best solar output. For maximum power, place the panels outside, away from all shadows in direct sunlight, placed precisely perpendicular to the sun’s angle in the sky. Chances are, it will take many days of direct sunlight to top off a power bank completely. But a few hours should give you enough to boost up a cell phone enough to make a call or send an email.

If you’re interested in off-the-grid use, check out our other articles on hand-cranked chargers for emergencies or on small portable generators for power whenever and wherever you might need it.

Rugged portable charger batteries have come a long way, and you can now find one in just the right size and configuration to suit your needs. Being able to hike or camp and recharge your camera, phone, or tablet when away from the grid is a big plus, but these chargers are great for daily use too. They’re easy to keep in your bag, so you always have a top-up when you need it.

Columbia vs North Face: Which Outdoor Brand is Better?