List of Camping Drinking Games to Enjoy with Friends

What are fun things to do while camping? If you’re of legal age and willing to toss back a few, the best campfire games for adults typically involve alcohol.

When you’re out roughing it in the wilderness with friends, camping drinking games can be a great icebreaker. While it’s important to enjoy these activities responsibly (at least within shouting distance of “responsibly”), they can help you create memories that will serve as the foundation of long and convivial friendships.

So, where should we begin? If you’ve never enjoyed campfire drinking games before, there are a few classics that you should familiarize yourself with beforehand. We’ve included these in the list below, along with a handful of others that might be new territory for you and your friends. All of them are excellent choices when you’re looking to enjoy a few drinking games around the fire. 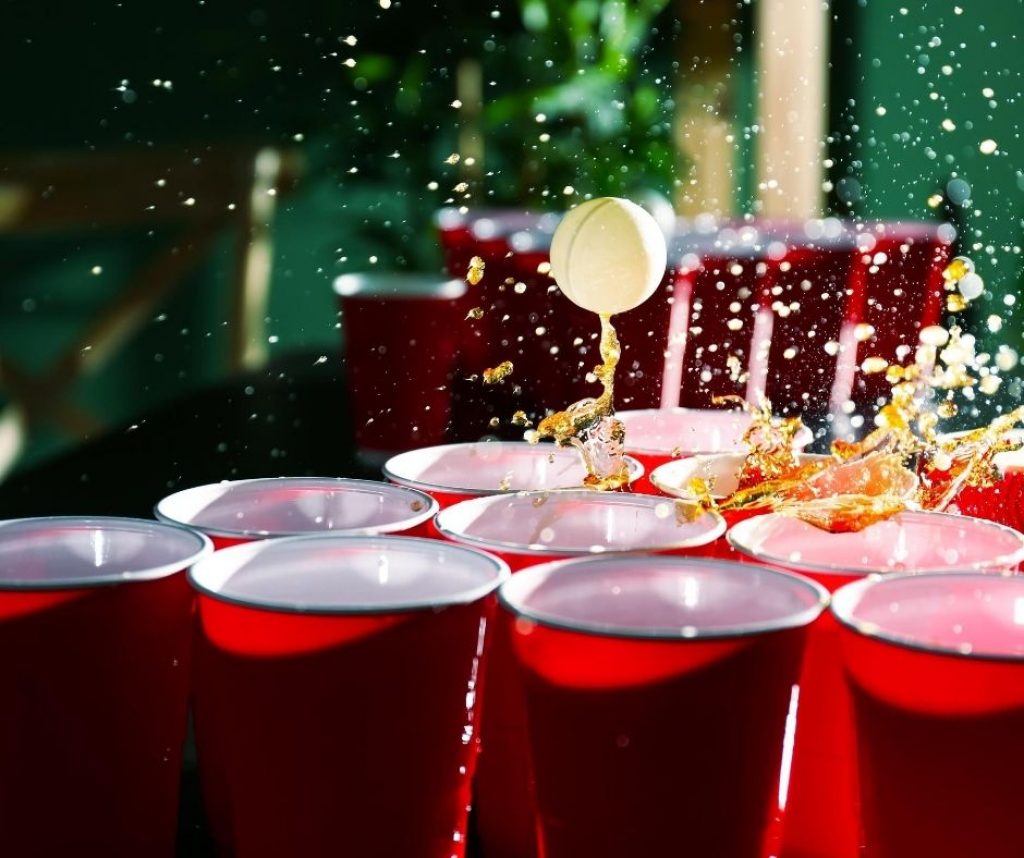 One of the most popular drinking games to play while camping, beer pong is as easy to learn as it is addictive. Here’s how to play.

First, you’ll need a table that measures 8 feet long. If you know you’ll be engaging in a few good campfire games during your trip, be sure to pack one of these. You’ll also need a hearty supply of 16-ounce Solo cups—at least 20 for regular play. It’s a good idea to bring more than you’ll need, though, especially for longer trips. Finally (and obviously), you’ll need a couple of ping-pong balls as well.

Decide in advance whether you’ll be playing in teams of two or one-on-one. In our experience, teams of two make for a more inclusive and uproarious game.

Fill each of the 20 cups about half-full of beer. If you want to drink more slowly, consider filling them only a quarter of the way full.

To play, the contestants take turns trying to land the ball in the opposing team’s beer cups. It’s permissible to bounce the ball off the table, but you can also throw them directly into the cups. Each team throws the ball once per turn.

When the ball lands in a cup, a player from the opposing team drains the cup and sets it aside. If there are two players on each team, they can alternate (one player drinks when the first ball is sunk, the second player drinks the next time, and so on).

The game is over when one team has managed to eliminate all of the opposing team’s cups. The team with no cups left loses the game.

Never Have I Ever 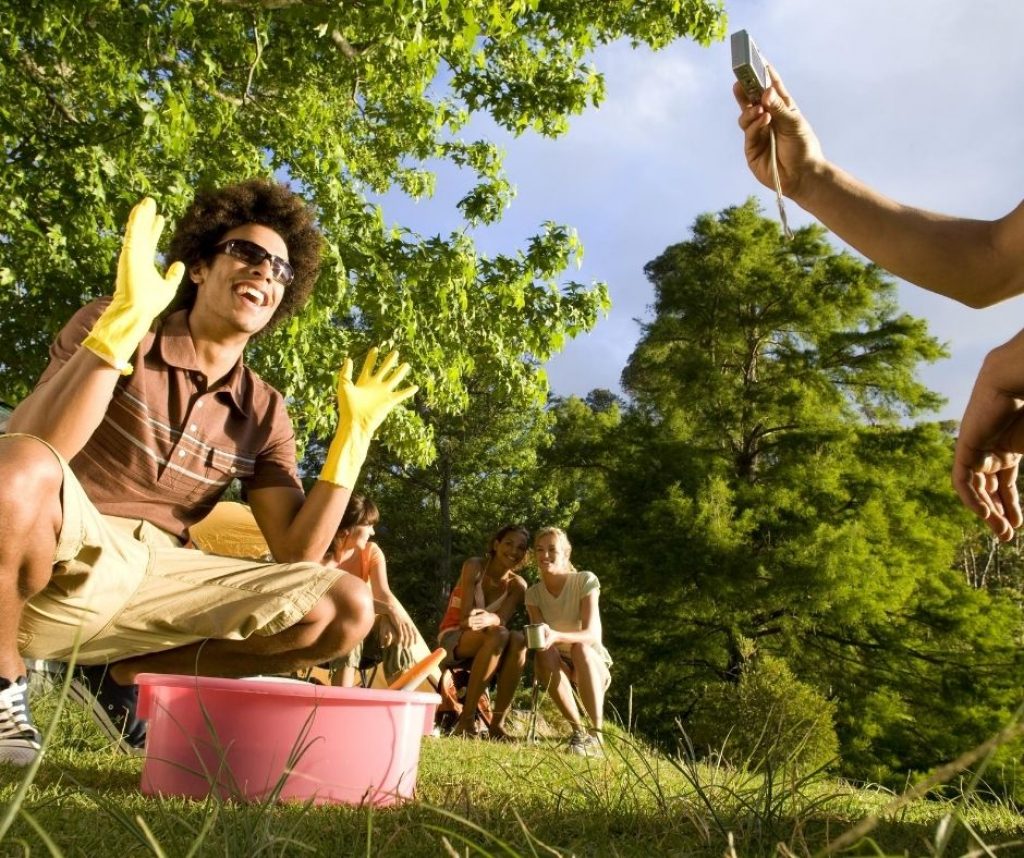 Campfire activities for large groups are always more fun when they involve the sharing of secrets. That’s what makes Never Have I Ever such an appealing campfire game for adults.

This is one of the most low-maintenance games to play at a bonfire—or anywhere else, for that matter. All you need is a group of people, a supply of your favorite alcoholic beverage, and a passable imagination.

Each player takes turns making a statement about an activity they supposedly haven’t done, beginning with the words “Never Have I Ever.” For example, a player might say “Never Have I Ever been to Mexico.” Every player who has been to Mexico would then take a sip of their drink. The more familiar the players are with one another, the more fun the game is.

Note that you don’t necessarily have to tell the truth with every statement—it’s permissible to say “Never Have I Ever . . .” and then say something you have done. Just remember that in that case, you’ll be required to take a sip—which might not be a bad thing after all. Play continues for as long as the contestants are willing to keep the game going.

Featured Product: Never Have I Ever | Adult Party Drinking Game - Board Game

For this game, you’ll need a couple of sturdy sticks of roughly the same size, two empty beer bottles, and a Frisbee. The sticks will need to be wide enough in diameter to provide a solid resting place for the beer bottles.

To begin, drive the sticks into the ground about 20 feet apart, then set the beer bottles on top of the sticks. Divide players into teams of as many people as you wish. Each team should gather around one of the poles, with the opposing team taking up residence on the other end.

For every point that’s scored, the opposing team must take a drink. The game is over when one team has scored at least 21 points and beaten the other team by at least 2 points.

Like Never Have I Ever, this game provides an enjoyable way to make memories with people you’ve known for a long time. To play, you’ll need only a supply of alcohol, a group of friends, and an engaging sense of humor.

Gather all the players in a circle around the campfire and make sure everyone has a full beverage. The first player begins by saying “Who’s most likely to . . .” and finishing with something that’s typically naughty or taboo in nature, such as “be arrested for streaking.”

On the count of three, everyone in the group will then point to the player who would be most likely to engage in that behavior. For each person that’s pointing to them, the player must take one sip of their drink. That means if 5 people are pointing in your direction, you would take 5 consecutive sips. The game continues in this way until the players decide they’ve had enough.

Featured Product: Whos Most Likely to... A Party Game

Be forewarned that this game gets players very drunk very quickly, so it might be a good idea to stick with beer instead of liquor. If you can’t stomach beer, we recommend at least using a mixer.

The Alphabet Drinking Game is another simple campfire activity for adults. To begin, everyone should arm themselves with their drink of choice, then arrange themselves in a circle around the fire.

The game continues around the circle, each player adding another item, until someone forgets one of the things on the list. At that point, the offending player takes a drink and misses their turn. The game continues in this way until everyone has missed their turn and taken a drink, at which point you can start all over again with a new theme.

Some of the best campfire drinking games have been adapted from games that college students play at house parties. Medusa is one of those. If there happens to be a round table at your campsite, then feel free to use it. Otherwise, an ordinary picnic table should suffice.

Fill a supply of shot glasses with the liquor of your choice and place them on the table. Jello shots are also a delightful option for this game.

Once the shots are in place, each player should put their head down on the surface of the table, the way children do in school. Everyone counts to three, then lifts their heads at the same time, attempting to stare directly at another player. At this point, it isn’t permissible to look away until the round ends.

In our opinion, camping drinking games have a definite edge over typical drinking games. Why? Well, first of all, they’re meant to be played outside under the stars, which invites everyone to loosen up and relax. Second, it’s easier to involve large groups of people, which comes in especially handy for bonfire drinking games. Finally, once the sun goes down, there’s not much to do on a camping trip besides enjoy a few cold ones—so why not have a little extra fun along the way?

The Best Tent for Desert Camping in 2022

The Best, Brightest and Ultralight Headlamp for Backpacking

Added to wishlistRemoved from wishlist 1